I just watched a web-talk given by Chris Anderson (online here) that sort of blew my mind. The last thing to really do that was Everything is Miscellaneous. Which, I’ll grant you, I read about a week ago – so either my mind is easily blown, we live in mind blowing times, or I’ve stumbled onto these two things for related reasons. I’ve heard of Anderson’s book The Long Tail before, but it sort of went on my list of high concept books that I should read. Having finished Everything is Miscellaneous and started on Wikinomics and The World is Flat, as well as having The Tipping Point sitting on my bookshelf, I had thought that I would have a short break. Alas, it look like The Long Tail is getting in line too, so I might be a few weeks from fluff reading.

That’s not what I wanted to talk about though. There was something that he said during the talk that I’ve always been fascinated with, and it’s this; those little boxes that have the newspapers inside them. You stick a quarter in, and the box opens up. What’s to prevent someone from pulling out all of the newspapers and reselling them? Or using that whole stack for paper mache? Or peeing on them? It’s a complex system of incentives at work, and one of the reason those boxes are really interesting to me.

The newspaper company isn’t really selling newspapers. They’re selling eyeballs to advertisers. Therefore, it’s in their best interests to get as many eyeballs on their papers as possible without regard to journalistic integrity. I think they’ve instead found that most of the time, journalistic integrity is what sells papers. That depends on your view of how fair and accurate the new media is though. I lean towards pretty fair, most of the time. Either way, it’s not in their best interests to limit their audience with high prices – that’s why newspapers are disproportionately cheap when compared to the cost that goes into making them. As cost goes down, the number of readers goes up.

So why don’t they just make newspapers free? Ah, well that’s because the newspaper* is selling eyeballs to companies. And just as the number of readers is inversely related to the cost, the interest of the individual is proportionally related to what it cost them. In other words, if a guy were paying $10 for a newspaper, you could be pretty certain that he’s going to read through the whole thing. By instituting a cost, the newspaper can weed out most of the people who would just pick up the paper and not read it. Check out this awesome chart with completely fake numbers: 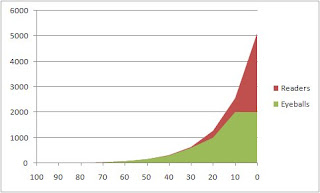 Aside from the fact that it was created in Excel in about two minutes, and that it’s made from data that was created by me to prove a point, it shows that we get too many people picking up newspapers and not reading them when the price is too low. And not just people not reading them either – we also get people that pick up the paper for a single story or a single section instead of going through the whole thing. The newspaper should then try to find a cost which maximizes eyeballs while minimizing the number of newspapers that aren’t read. And of course there’s income associated with people paying for the paper, even if it’s just a fraction of the income generated by advertising.

But while the newspaper is juggling wasted papers, readership, and income, there’s another big factor that isn’t immediately apparent; coins. I regularly read USA Today, because I have lots of time and my college provides them free to students and staff. This reduces my actual interaction with the newspaper boxes to zero. Anyway, it normally costs 75 cents. Does it cost that because 75 cents is the amount that properly juggles the three main factors of price in a way most in-line with the needs of USA Today? Is it because 75 cents is more optimal than 74 or 76 cents? No. It’s because 75 cents is three quarters. If it cost 70 cents or 80 cents, the person on the street would have to have a much more specific set of coins. So the choice comes in multiples of 25 cents, which must reduces efficiency but speeds up the decision making process.

*It’s odd that “newspaper” stands in for both the company and the physical item. Unless it doesn’t and I’ve made a grammatical faux pas.