Alright, this is part of the below post, but with handy-dandy pictures for explanation:

To the left is a picture of a linear narrative in a game. The circles represent plot points, and the lines show the flow from one plot point to the other. Depending on the game, a plot point might be any number of things – in this case, its usually a level. The player plays through a level, gets some exposition, set-up, or something similar, and then plays another level. This continues until the end of the game. Nothing the player does can actually effect the outcome of the game – if he fails to do something necessary to the plot, the game will either tell him that he loses, or fail to progress. Its usually better for the player to outright lose if its not possible for the game to progress, because otherwise the player will wander around trying to figure out what went wrong.

Games that use this structure: the Halo series, the Half-life series, the Sonic the Hedgehog series, the Mario series, and generally speaking, the majority of games which rely on gameplay to entertain rather than narrative.

Results: This style of gameplay requires moral thought on the part of the player, is cheap to produce compared to other methods, and makes games more modular. It can be unsatisfying to players who want their choices to matter, and it offers low replay value.

Single linear games are closely related to “hub world” style narratives, where there are things A, B, and C to do before thing D can happen. A, B, and C can be done in any order, and the order they’re done in does not effect the narrative. D is inevitable. In this way, “hub world” narratives offer the same level of interactivity as a strictly linear game, but with even less narrative. 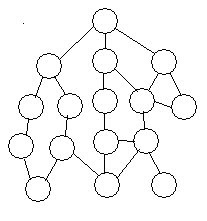 To the left is a picture of a branching narrative. You can see that the gameplay offers different possibilities, some of which are mutually exclusive. Something that the player does effects what happens next. You might see that some of the branches lead into other branches – this is beneficial to players who have reconsidered the choices they have made. It’s not fun for a player to be stuck on one track for the rest of the game because of a choice they made at the beginning. Some games combine linear and branching so that while choice A and B might lead somewhere else, they both eventually converge at E (with no way to avoid it). This reduces the costs of production.

Games that use this structure: the Elder Scrolls series, the Final Fantasy series, the Neverwinter Nights series, and the Baulder’s Gate series.

Consequences: This type of game is expensive to produce, because each branch needs to have its own artwork, dialog, etc. Furthermore, branching is exponential unless the branches lead to inevitable things (like in linear stories). If this narrative “tree” can be automated, much of the work can be taken away from the designers and put into the hands of algorithms. This often produces repetitive narrative though.

There’s another type of narrative that’s closely related to branching, and which has come up as a cheap way of simulating moral choices. It’s what I call the “duality” model. Essentially, the player is given two choices for each plot point. Both choices have different outcomes, but they both lead into the same plot point. The game usually keeps track of these choices on a continuum – usually good and evil. So a player can play through the game “good” by only choosing the “good choices”, or a player can play through the game “evil” by only choosing the “evil” choices. The player can also mix and match for neutral choices. This requires far less work than real branching, because you only really need to prepare branching plot points for thresholds instead of choices. Game that use this style include Knights of the Old Republic, Jade Empire, Bioshock, and Fable.

Narrative Structures in Games: With Pictures!
PrevPreviousProblems in Gaming Narratives
NextThe Industrial Society and its Future, pt. 2Next